The police have come under fire lately for their handling of the recent student protests – the tactics that they have used and the level of force utilised. There are at least two sides to every story, we are told, and two differing sides have clearly been portrayed in the protests of late.

On the one side we have the view that the student protests have been mainly violent affairs, with the majority creating havoc and destruction and damaging their own cause. Supporters of this view praise the police for their actions and for showing “restraint” against the rampant “mobs”. On the other side, we have the view that the police have over-reacted and they have been the ones who instigated the violence, with supporters of this view claiming that it is the police who have been acting violently and over-extending their powers, detaining or “kettling” protestors for many hours on end with no access to food, water, toilers or shelter – effectively removing their civil liberties. What doesn’t help either side is the biased media shows that are played out, with many only showing the most sensationalist aspects of the protest, whilst ignoring the peaceful majority. 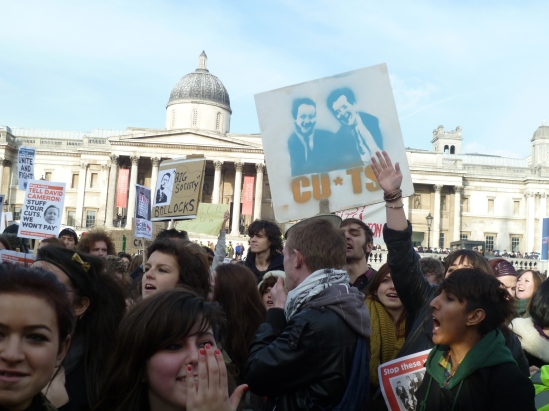 As the government plans to cut higher education funding whilst pushing up the cost of tuition fees, many are left reeling in the wake of the Liberal Democrats’ complete U-Turn on their own manifesto and the worries for the future of higher education itself.

The coalition proposes to cut teaching grants by 80%  and to raise tuition fees by nearly triple the current asking price as a “replacement” for the massive cut in education funding. This will leave Universities with around a 40% drop in their guaranteed incomes. But what will be the real repercussions of these proposals?

It essentially means that the funding of university teaching will shift from the taxpayer to the student, thus creating a free market in Uni courses. END_OF_DOCUMENT_TOKEN_TO_BE_REPLACED